No group name in the scheduler list. Just a blank row...
Attach files

djsoft said:
It switches to the next track after it detected that the stream is no longer available and the network buffer was played. It also gives some time for it to refill the buffer, that's what appears to be happening in your case. I don't think this should be changed, as typically network problems are rare and it will have a brief silence and then continue playing.


You can't seek a network stream.
Click to expand...

What you write is incorrect, in all, I repeat all, the previous versions it was possible to adjust the elapsed time of the stream by moving the search bar to the player. This is to fix any interruptions, if the stream stops or RadioBoss freezes, or restarts, the stream returns to the beginning as it is possible to return with the search bar to the correct position of the time elapsed now?. This happens when you schedule the live stream with a schedule. Please check it out!

minor irritation/bug
the total time of tracks in playlist keeps blinking, the 7d 1:25:11 bit, in this example, blinks for several minutes, maybe its not it a bug, maybe its RB calculating the total time if tracks have been deleted while the playlist was running

Good day
Is there any way to reenable Tree view in the explorer tab?
Thanks
B

A few questions with v6: 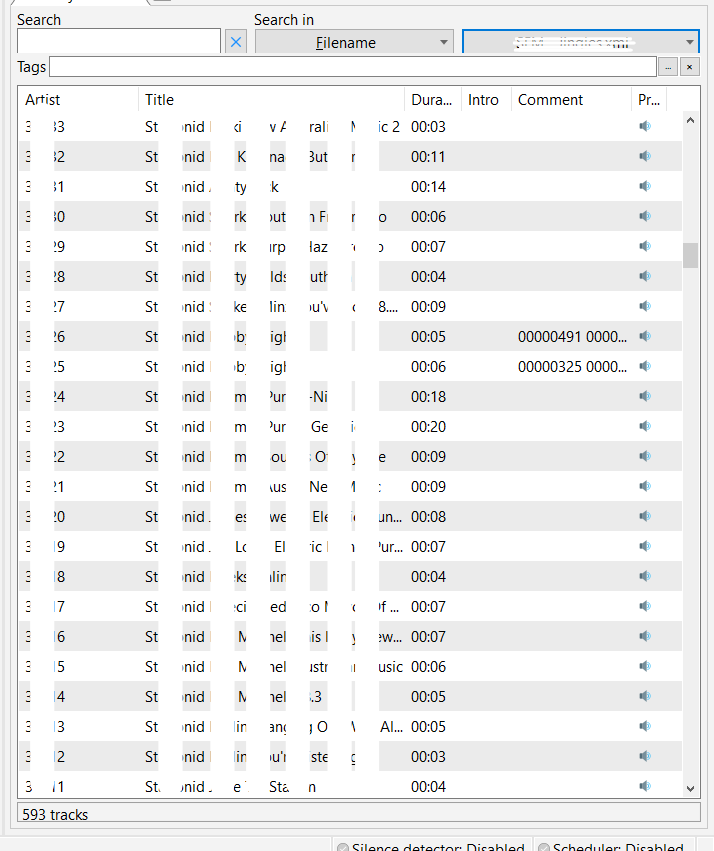 In 5.9 in the search box (without entering a term) the default song sorting was by last added. It was good for quickly add new songs in the playlist.
Can you add a column in the search box - Added?
Last edited: Dec 17, 2020
O

i am still looking to get a scheduler command that would refresh the scheduler window.
just to clarify, the various commands to stop and start various groups DO work as intended, eg it disables "day" and enables "night" and does those things correctly, it DIMS those items but does NOT hide them, until you click on the enabled check box twice, seems like a refresh scheduler window would be a fairly simple thing
D

nelson c said:
RB 4.9 roughly we discussed this topic (go immediately to next track) and this was a huge improvement.
Click to expand...

There was a surge of complaints about this, most users need it to try to play the stream and not abandon it immediately on any error. I think such options could be added to the "Advanced configuration" settings to allow fine tuning like this, noted for the future versions.
D

Does it happen for one group or it fails to display all groups? Please also specify what version do you use.


Bensisko said:
the previous versions it was possible to adjust the elapsed time of the stream by moving the search bar to the player
Click to expand...

We've removed that as "seeking" a network stream is not possible. If you only need it control the playback time, I think this can be added back, no big deal scheduled for the RadioBOSS 6.0.2 update.


ormston said:
the total time of tracks in playlist keeps blinking, the 7d 1:25:11 bit, in this example, blinks for several minutes, maybe its not it a bug, maybe its RB calculating the total time if tracks have been deleted while the playlist was running
Click to expand...

It recalculates this periodically to ensure that the actual data is displayed, and even when it updates, it should not blink. How often does it do it?


Strop1957 said:
Is there any way to reenable Tree view in the explorer tab?
Click to expand...

Bjorn said:
Is it possible to rename the 'Insert Stop' to something like Stop? It used to be possible in 'file types' in settings but I can't get it to work
Click to expand...

The value you set in File Types is now displayed in a different playlist column - Broadcasting Title, you can use it instead of the Track Title column.


Bjorn said:
Would it be possible to add the option to rename the playlist columns? For example, if I would like to change 'Intro' to 'Song start'
Click to expand...

You can edit the language files in (RadioBOSS install folder)\Lang\En - but those changes will be overwritten when you install an update.


Bjorn said:
Can the icon be added to the left of start time again or as an option as opposed to just for the '#' playlist column?
Click to expand...

This is how it works, the icon is displayed in the first column. Please ensure that you use RadioBOSS 6.0.1.8.

Can you please provide more details?


Bjorn said:
And finally, is it possible to Ctrl+A files in the music library
Click to expand...

It should work, but I see it doesn't - will be fixed in the next update.
D

tomimatko said:
In 5.9 in the search box (without entering a term) the default song sorting was by last added. It was good for quickly add new songs in the playlist.
Can you add a column in the search box - Added?
Click to expand...

Makes sense - will be added in the next update.


ormston said:
it DIMS those items but does NOT hide them
Click to expand...

Why should it hide them?

When pre-loading the following track, this is actually very useful for us as we intend on using OneDrive for RadioBOSS on laptops. The pre-load feature is enough to trigger OneDrive into downloading the next track onto the device, in preparation for it to play.

Where it comes a bit unstuck though, is when we set the pre-load to a large number, such as 15 seconds. Any file that is under 15 seconds will load, but because it is short, it will not pre-load the following track. This can be a problem if we play a music track, then a short station ID, then want to progress onto another track, which may take a few seconds to download from OneDrive.

Instead of it preloading the next track (if the trigger point is hit - e.g. 15 seconds), could we set it to preload the next few tracks?

Yes, we could download a local copy of the OneDrive files in advance, but it would be very handy if we could do this on the fly without additional workload.

Also - if the track following a playing song is a command (e.g. stop), the next track after the command is not preloaded. Preloading the next few tracks would help solve this, but otherwise, the following playable track should be pre-loaded where possible, with stop commands ignored.

For the moment with OneDrive, our workaround is, we can click on each track one by one while the playlist is stopped, and OneDrive will be triggered to load the track, so it will download the file on to the hard drive. Then we can play it later on with local copies of the files on the hard drive. If this alone could be triggered on an active playlist (preload all), that would solve all our preload problems. I'm aware the intent of the preload is more for network hosted music, so perhaps my issue isn't entirely the same, but maybe an option 'preload Cloud content' or something, could be set somewhere and that would be very helpful.
Last edited: Dec 18, 2020

I assume this is a bug. Intended behaviour would be for the music library to do nothing (except list the searched for results), unless 'pre-listen' is chosen, or unless the track is dragged to the active playlist.

By the way, I still think combo list is better for the music library list than what it's been changed to. Even with a few libraries, it feels more natural switching between libraries.

Any chance we can go back to that?

Can you make an option to add an artcover picture when i play an internet stream?
O

i think it when a command has ran to disable a group and enable another group which effectively changes the scheduled items, it should then show those enabled items not dim out the old items. 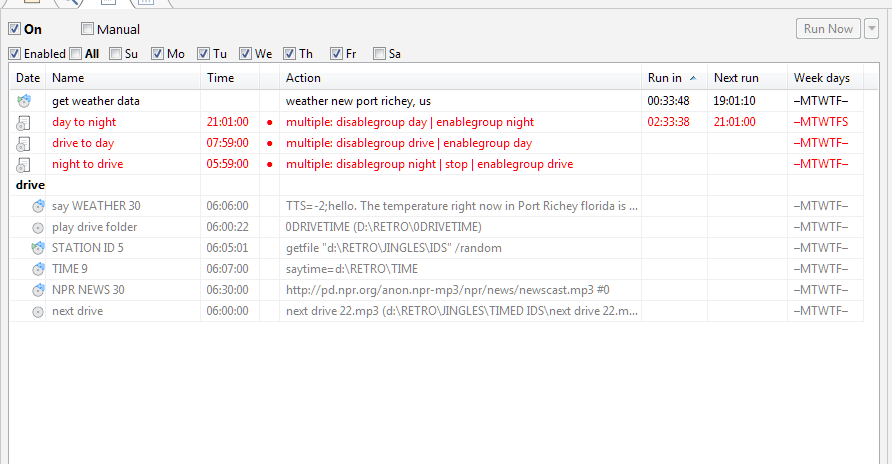 in this screenshot above the action disablegroup drive and enablegroup day is combined and it ran at 07:59:00 this morning but the scheduler window is still showing the drive items as dimmed but not showing the day items at all. When i uncheck enabled and recheck enabled it corrects this. I think it should refresh either automatically as the commands run, or at least have a refresh command available that i can add to that multi event action so it would run disablegroup x, enablegroup y, refresh.
OK i can click and click again on the enabled checkbox and it displays correctly then, as in the next screenshot, but i am having to do that every day. 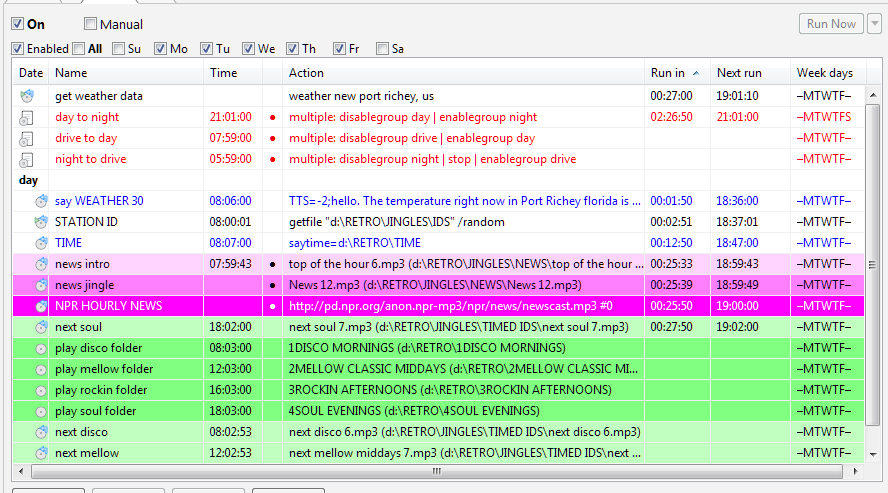 it should hide them because after the disablegroup action those items are no longer enabled and the checkbox is set to show only enabled item, therefore disabled items should no show